This is the book I am beginning with. There are a ton of stories in here, many of them very short, some of them headscratchers. I won't review each story, but I will mention the standouts.

And if I'm going to do this all summer, I need to remember that there is only one M in Hemmingway.
Posted by Pensive Pelican at 7:18 AM No comments:

I had never read any of Ernest Hemingway's work until this past year when I read A Movable Feast in preparation to read A Paris Wife.

I always considered him a man's writer, a misogynist and a drunk. Mind you, this judgment was formed without reading a word of his prose.

To say that I was pleasantly surprised is an understatement. His style is like that of F Scott Fitzgerald in that his work is sparsely written, tightly edited. Every word earns its keep. Description is not lacking it's just well chosen.

I enjoy reading spare prose and I aspire to write it although you would never know by this rambling missive.

So I bought a book of Hemingway's short stories and four of his novels. I'm going to read them this summer and blog about them here.

This venture would be even more fun if if was interactive so please feel free to tell me what you think of Ernest Hemingway; his life or his works.

Tell me your favorite stories or novels, or what you liked or did not.
Posted by Pensive Pelican at 9:06 PM 2 comments:

Beauty Secrets from the People Who Know Best


These are great makeup tips from Shape. I really liked the one about using black liner on the top lid and brown on the bottom. I like the drama of black liner, but if I use it on the bottom, it seems to narrow my already small eyes. I tend to leave the bottom unlined.

Another great tip is mixing your moisturizer and your foundation to make your own tinted moisturizer. I've been doing this for years using the back of my hand as a pallet and applying with a foundation brush.
If you don't own a foundation brush, get one. The coverage is just perfect, not to heavy or light and you'll blend your makeup flawlessly. It seems faster to me as well which is a plus on busy mornings.
Posted by Pensive Pelican at 6:37 PM No comments:

This is republished from my other blog, www.ooohsomethingshiny.com where it is my most popular blog of all time. I don't know what that says about me. Or my readers.

Seriously. I just finished reading A Moveable Feast by Ernest Hemingway. It’s Hemingway’s account of being young and poor and writing in various Paris cafes (FYI, there are no current openings for this. I already checked monster.com, so don’t bother looking).

I began reading this book after seeing a review of A Paris Wife by Paula McLain, a fictionalized account of the same period, based on Hemingway’s book. I thought that I should read the original non-fiction version before attacking the fan fiction though, so I picked up a copy of A Moveable Feast at the library even though I had previously not read much any Hemingway.

Nothing against Hemingway, but I thought he was for boys. Bullfighting, fishing, hunting. Sounds like the adult version of Boy’s Life Magazine. I did like his style in the non-fiction book though, so I am going to pick up some of his fiction. I may start with The Snows of Kilimanjaro because I like both snow and mountains, so it’s probably a fun read.

Anywho…Hemingway’s adventures in Paris included meeting all kinds of interesting people like Gertrude Stein, Ezra Pound and of course, F Scott Fitzgerald who was there with Zelda and Scotty. Hemingway devotes an entire chapter to Fitzgerald, including a bumbling roadtrip that reads like an Abbott and Costello sketch. If Ben Affleck and Matt Damon hadn’t broken up they could probably stretch it out to a movie.

One day after a drink or two, Fitzgerald reveals (foreshadowing right there) to Hemingway that his wife had told him that because of the way he was “built” he could “never make any woman happy.” Since Zelda was Scott’s first, and at that time only woman, he had no reason to doubt her word, but it nagged at him. So Scott asked Ernest over cherry tarts and wine if he would mind having a little look-see.

Hemingway’s reluctant examination determined Scott to be ”perfectly fine” and he told him the problem was, “You look at yourself from above and you look foreshortened.” Hemingway then took him for a little stroll to the Louvre (MY preferred method of settling arguments) so that Scott could see the (ahem) statutory evidence for himself.

Scott was somewhat reassured, but baffled as to why his wife would make such a damaging false claim. Hemingway’s answer:

“To put you out of business. That’s the oldest way in the book of putting people out of business.” So in other words, Scott was lucky that Zelda tolerated him in the sack, so he’d best not bother looking elsewhere.

So, my review: A Moveable Feast by Ernest Hemingway is a good book to read if you are interested in Hemingway, Paris, writing or F Scott Fitzgerald’s penis.
Posted by Pensive Pelican at 9:18 PM No comments: 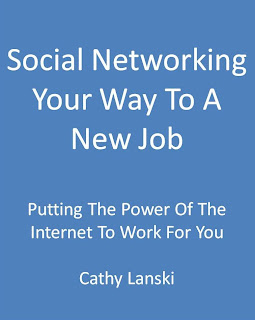 So, this is what I have been doing with the bulk of my free time the last few months (when I am not playing cello!). I was hit by the layoff shoulder tap twice (!) in the last three years. Each time I found a new job reasonably quickly and a big part of that was relying on both my personal network  and my social network.


Speaking to a few of my unemployed colleagues, I realized that many of them could use some guidance to create an online network and uncover hidden career opportunities. Networking for jobs, particularly on the internet, is a new concept for many professionals, especially those who have been with the same company for many years.

So I put together this short e-book, about 30 pages long, that serves as a quick guide to navigating the many options that are available to create a professional social network using LinkedIn, Facebook and Twitter and finding new opportunities with an internet optimized resume and online job sites. I also cover creating an online presence and preparing for phone and video interviews.

Right now Social Networking Your Way to a New Job: Putting the Power of the Internet to Work for You is available on Amazon Kindle for $2.99.
Posted by Pensive Pelican at 4:51 PM No comments:

Imagine a fictional son of John Updike (Couples and Rabbit Updike, before he begin living entirely in his own head). Add healthy doses of Dave Barry and Scott Adams and sprinkle with a little hipster. This is Tom Violet, the snarky, mis-employed son of critically acclaimed, womanizing author Curtis Violet.

Matthew Norman's Domestic Violets details the foibles of Tom Violet who, having grown up in the shadow of this literary giant opts to join the corporate world rather than compete on his father's home turf. To say that Tom is ill-suited for corporate life is the grossest of understatement.

Tom's subversive office antics save his sanity, but undermine his career. He tortures his corporate drone coworker, Greg, flirts dangerously with his young coworker Katie, while his indulgent boss Doug ignores much of his shenanigans because of Tom's copy writing talent.

When Ian, British company president comes to town to shake things up, it means big changes for Tom, who describes Ian's office to Katie:

"standard president stuff...Water slide. Gold-plated desk. Little Korean boy fanning him with a giant feather."
I was frequently annoyed that my real life interfered with my ability to get back to Domestic Violets and find out how Tom would resolve his sexual and professional impotence and rebuild his career, marriage and relationship with his parents.

Definitely a fun, fast read with well-developed relatable characters and a page-turning plot.
Posted by Pensive Pelican at 7:32 PM No comments: 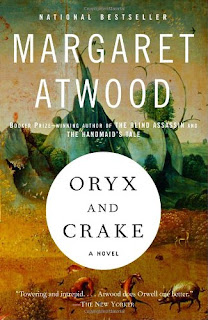 Oryx and Crake is dystopian and depressing, but when is dystopian NOT depressing? This, like the best dystopian novels takes present reality and turns it up a notch. Or maybe a  couple of notches.

As much as I loved the Hunger Games series, it is difficult to draw a direct line from current society to where it devolved to in the book. Not so with Oryx and Crake. The path to Atwood's future reality from current technology is straight and alarmingly solid.

One annoyance and possible spoiler is the mushy ending. Even a novel intended to be part of a trilogy should have a beginning, middle and end. The cliffhanger ending calls to mind a television show going to commercial break.